Managing the add-on libraries for your campaign.#

The dialog to manage the add-on libraries for your campaign can be reached using the add-on menu item in file menu. 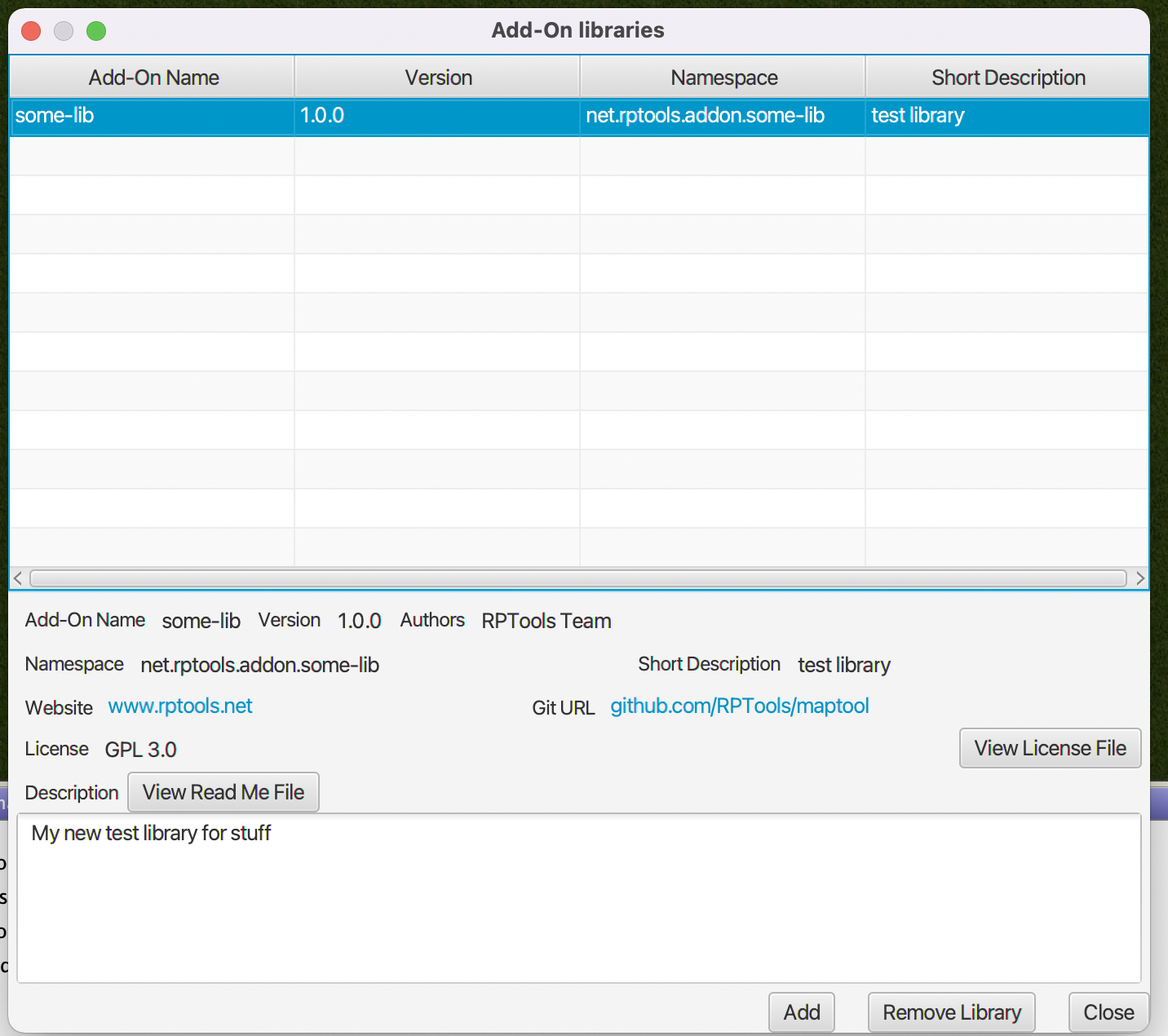 This dialog can be used to add or remove add-on libraries, view the details of all add-ons in the campaign and view their license/read me files.

Add-On libraries can be shared in a .mtlib file. This file is a zip file with a specific structure and content. You can import these libraries with the File -> Import Add-On Library menu option.

format of the configuration file#

The library.json configuration file is a json file with the following structure.

The properties in this file are

ReadMe and License files can be plain text, HTML, or Markdown (GitHub Flavored). These can be viewed from the add-on dialog.

GitHub provides a way to host your own static site at <username>.github.io, if you do not have your own host this can be used for both your add-on webstite and reversed for namespace. There is no requirement fo there to be an actual website running at the address used for the namespace.

format of the events configuration file#

This json file contains which files should be run for certain events.

Add ons do not respond to the "onCampaignLoad" event, instead they have 2 new events.

The other events must be in the "legacyEvents" section, as the name implies these events are now considered to be legacy events, new events will be added in the future to replace these (these will not be removed though).

Currently only macro scripts are supported, in the future JavaScript scripts will also be supported.

The path of the file becomes that macroname for [macro(): ] the namespace of the add-on library is used for the @ portion.

Add-On libraries support both public and private macro functions. Public macro functions must reside in the mtscript/public and can be called from anywhere (chat, other add-ons, lib:tokens, macro buttons). You can call them using the following syntax [macro("[email protected]:net.rptools.maptool.test-library")] executes MTScript macro in the file content/mtscript/public/mtscript1.mts.

The "public/" is ommited from the macro name when calling it. You can also use subdirectories to organise your macros and would call them like [macro("subdir/[email protected]:net.rptools.maptool.test-library")]

The @this shorthand can also be used for calling a macro from within the same add-on, similar to how it works for lib:Tokens. For example [macro("[email protected]")]

Macro script files that are not in the "public/" directory can only be called from within the add-on itself or by events. Given a library with the namespace net.mylib.addon with the following files.

Then only the one in public/ will be able to be executed, you will not be able to call the other macro

The above works not just with `[macro():] but the other places you would expect it to as well such as defineFunction() for user defined functions and macro links.

The mts_properties.json file contains property information about macro scripts, it is not required and currrently only allows you to set properties used in macro links.

The contents of this directory are exposed as a lib:// URI as long as the allowsUriAccess is set to true in the configuration file. The public directory part of the filename is discared, for example public/myhttml.html -> lib://net.myaddons.addon1/myhtml.html

You can add images to this directory and use src="lib://" in image tags in HTML. It will eventually work with audio (probably aleady does but I haven't tested it yet so not claining it will yet :) )

These assets will be included correctly in the campaign file when saving, so you do not need to add them to image tables or image tokens or any other tricks to make sure that they are included.

As Add Ons do not live on a token there are no token properties for them. Instead there has been a new area created for storing data that is a lot more flexible -- and will allow data to be stored agisnt other entities like maps in the future. The existing lib property functions below have been modified to work with this new data store if called with an add-on as the target.

There are some differences to be aware of when using lib property support for add-ons.

There is a new function to access te static data within add-ons.

The token popup menu includes a way to export your existing library tokens to an add-on. This is useful for starting the conversion of an existing token library to an add-on but in all but the simplest lib:tokens you will want edit the extracted data.

Things you will want to change#

After doing the above you should REALLY take the opportunity to source control your Add-On...

One thing to realise is this change allows serveral things that are not immediately obvious. For example, experiment with frame5/dialog5 and lib:// URI support and ability to store images, you would be surprised how close it is to devloping a standard web site. Ass a proof of concept I have even been able to get a small React App written in TypeScript running realtively easily by using webpack to bundle it and copy it into the public directory. (Note the SVG for the beginner React app doesn't work correctly but replacing it with a png works).